I've had my Goal Zero Boulder 100 panel since Overland Expo West earlier this year. It's great for camping at a site for more then just one night and provides a pretty decent amount of power to my Goal Zero Yeti 100 lithium. However, constantly packing and unpacking it was growing slightly painful. It also bounced around a bit in the bed, even with other items and I didn't want to damage it.

So I watched a bit of YouTube and found a creator named MOAK. Specifically this video. Where he custom mounts his panel to the top of his roof rack. This wound up my limited creative side of my brain and I went crazy buying parts to do something similar. Below is the story of how I learned to cut Aluminium for the first time, the drastic overspending I did, and well... the story of mounting this panel to a Rhino Rack Pioneer platform.

I am NOT responsible for you damaging your solar panel, your roof rack, your vehicle, yourself, your dog, or anything due to you attempting to replicate this on your own.

This guide is NOT meant to be a total fabrication walk through or comprehensive. I will give measurements and fittings for MY setup, adjust accordingly to your setup.

This guide will hopefully help inspire you to add something awesome to your overland mobile.

So lucky for me, there's an ACE Hardware right down the street. Not so lucky for my wallet I guess. So lets get started with everything that I actually used!

Bolt Notes:
- Flange Bolts are NOT a requirement, use whatever you want.
- It should go without saying that you should also get stop nuts, normal nuts with flat/lock washers, or whatever size and fittings you want.
- Don't ask me why I mixed M6 and M7, I don't know, I bought a bunch of shit that looked cool.
- You could probably use M8 if you wanted but I didn't think it necessary
- I bought 95% of this at ACE Hardware, the gas lift I got from Advance Auto Parts along with the ball studs.
- I HIGHLY recommend you buy those longer ball studs I linked, if you cant find longer (35mm to 40mm)

Here are the cuts I did:

I originally did one more gas lift bracket, since I had bought one gas lift for each side, but I later decided against the one on the pax side.

The 10-1/2in cuts go across the cross bar/mounting bar channel things on the top of the Rhino Rack. This is because the way I centered the panel, the side brackets I attached to it ended up being in the middle empty space between the bars.

I'll be honest, outside of measuring the 10.5in cross bar mounts. I didnt really measure anything else. I knew I wanted the side brackets to match the cross bar brackets, which are 2 in wide, so a 2 in cut there was perfect.

Orientation: This is probably the time you need to decide which way you want the panel power cable going to. I chose to mount the cable box on the driver side of the truck. If you'd like it on the passenger side, make sure you keep track of where to install the side brackets.

Side Brackets:
I made sure the top of the bracket would be flush with the "top" of the panel (i.e. the solar up side) and marked where I wanted the holes. I did this more in the "middle" of the side of the panel wall. If you have a panel and look at it, the solar cells seem to sit in around 5-10mm so you don't want to drill close to the top at all.

I first drilled out the holes in the bracket, then took the bracket to the side where I would mount it and drilled through the bracket into the side of the panel. I then repeated this for the other side. So both brackets are not the exact same drilled holes. If that makes sense.

Gas Lift Bracket:
I knew that the rod would be "forward" of the mounting hole and I wanted to have the least amount of stuff showing on the outside, so I orientated it so that one side would be mounted down to the rack, and the other would face towards the outside. I then drilled a hole on the outside wall towards the "back" and then another near the middle/front on the bottom. The photo below should help explain this.

Note: I will probably redo this as it is not an ideal 45 degree angle, however the channel opening is near the mounting bolt so in order to get the proper angle I will need to turn this "inside out" and possible make the bracket a little longer. 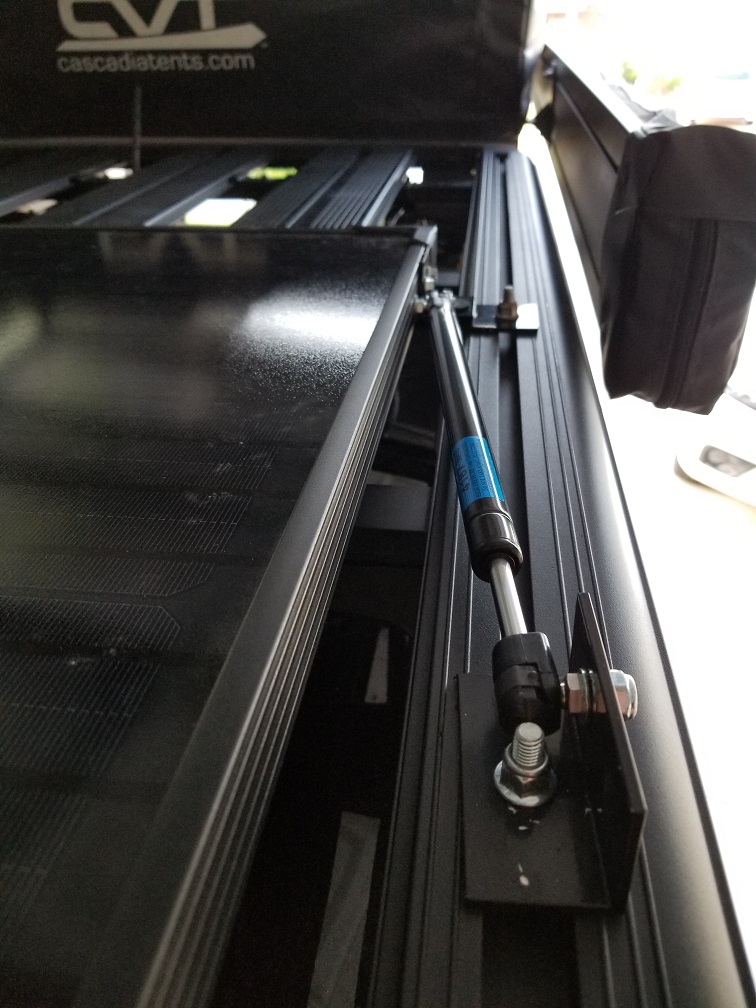 Front Brackets:
I then took the 4x 3-1/5in cuts I did and marked where the middle hole of the door hinge was, and drilled those both out.

I should note that I did not drill the "top" of the panel until I had test fitted everything.

I mounted everything to the Rhino Rack, placed and centered the panel on the rack, and marked the 3 holes in the front to drill. After I removed the panel and made the drill.

It's important to note that I didn't flush mount the top of the door hinge bracket with the top of the solar panel. I felt that the top bolt was top close to the panel and instead I decided to mount it flush with the first "line" in the panel, as you can see below. 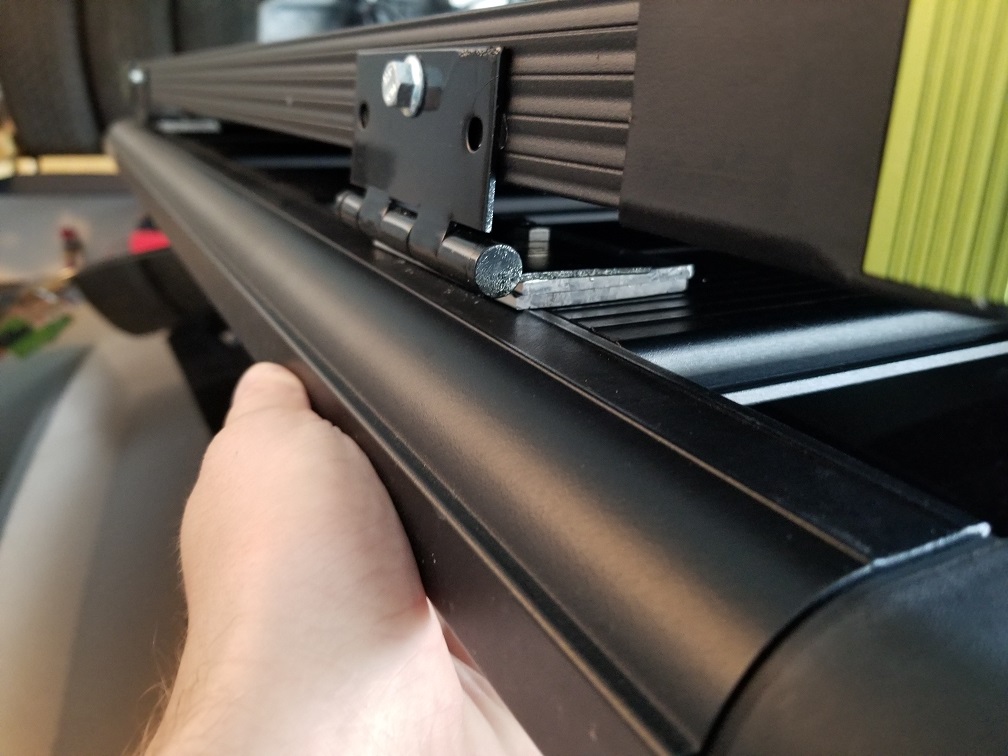 After drilling, I placed the panel back up on the rack to bolt and fit test everything. It was only after I bolted in the front that I properly secured the rear cross bar brackets I made, and then made a mark for where to drill through the panel side bracket and the cross bar bracket. This would allow me to secure the panel down.

I painted all parts after I made all the cuts and drilled all the holes. I used a Rust-Oleum gloss black paint, let it sit for a day, turned them over, sprayed again. Let dry.

After everything was dry from paint I remounted all the brackets to the panel and to the Rhino Rack.

Information:
As far as mounting hardware, i.e. the bolts I used in the channel of the Rhino Rack...
Cross / Gas brackets: I had these left over. 5 of them where M8 very flat head mounting bolts from Leitner Designs (used in the cargo rack system) and secured the cross bar brackets (4) and the gas lift bracket (1).

Front Door Hinges:  Secured to the Rhino rack with leftover pioneer RTL600 parts. Mainly THESE M6 Nut's and bolts. I know the pioneer racks normall use THESE, but whatever works.

If I had more, I would strictly use the bolts from Leitner on everything. But having the bolt "face down" instead of "thread up" looks cleaner, personal preference really.
Note: I couldn't find links to just the nuts and bolts on Rhino Racks website.

The last major step was running the wire for the panel. Make sure that you do this with the panel in the "up" position so that you have the right amount of slack left in the wire.

With that, I put the wire into some wire loom and zip tied it to the cross bars on the rack. 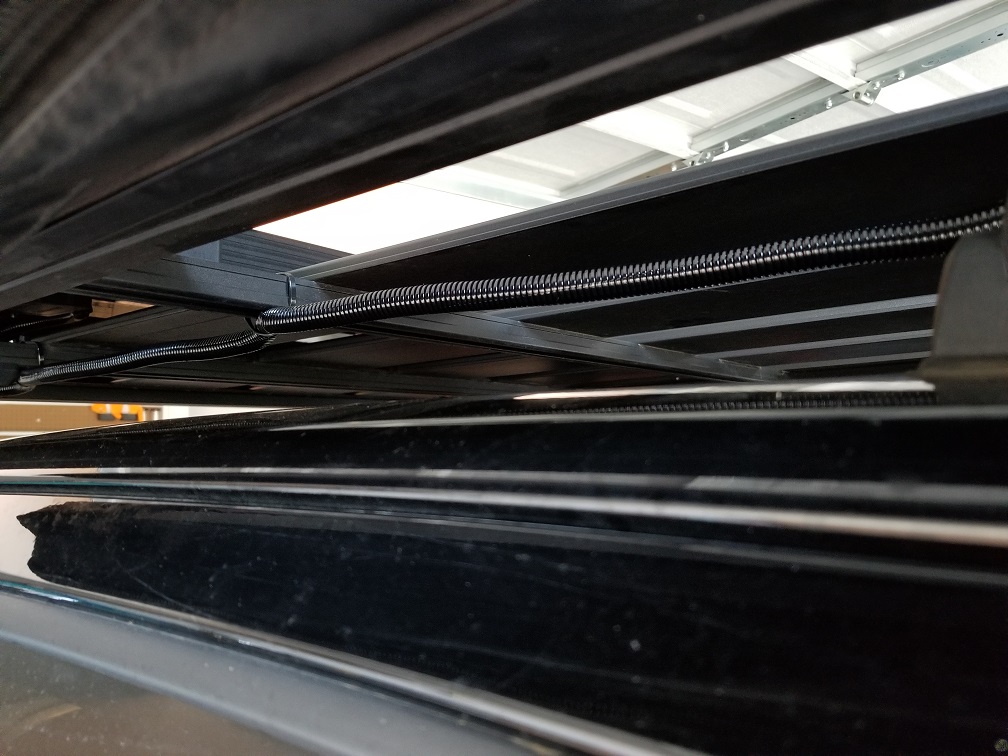 Inner Paneling:
In order to protect the headliner from possible hot metal burns during drilling. I wanted to pull back the rear a little bit and insert a piece of cardboard. This isn't super difficult to do, as long as you have a 7mm socket.....

Above the rear seat belt is a little piece that says "ABS". You can take this off with a little flat head and behind it you'll see that little 7mm bolt that I was talking about. Take that off, then gently but strongly pull the plastic piece back towards you. You will hopefully hear the clip on the left side of it come out. Then you will need to slide it "up" away from the black plastic that goes down the the floor. This is done by pushing up on two plastic clips that locks the two pieces into each other and then sliding the tan piece up.

I also removed the hand hold on the side I was working on. You'll see the same little compartments on it like the ABS thingy, but these require an 8mm socket. Then just pull it off.

Then gently pull the liner away from the roof. Unless you've done both sides (which I didn't) it wont come down far, but just enough for you to slide in some cardboard.

Grommets and Silicone:
I had purchased a bag of 1/2in grommets. The large size was needed because of the large end of the cable to fit through, as I didn't want to cut it and splice it back together.

The drill hole for these is 11/16", which I don't have. So I took a 1/2in bit and made the initial hole and then eased around the edged slowly, making a bigger hole. I stopped and kept checking for a good fit every "round" I made and eventually got it perfect.

I pushed the end through the grommet and positioned it where I wanted it in the rear of the headliner.

Before I silicone'd it all up. I reinstalled the headliner in the cab and ensure the cable was pulled through to where I wanted it.

Then..... as you can see below. I went a little crazy with the silicone. Please don't judge to hard, as I've honestly never done it before. But hey, there's been rain every day since and it hasn't leaked since. 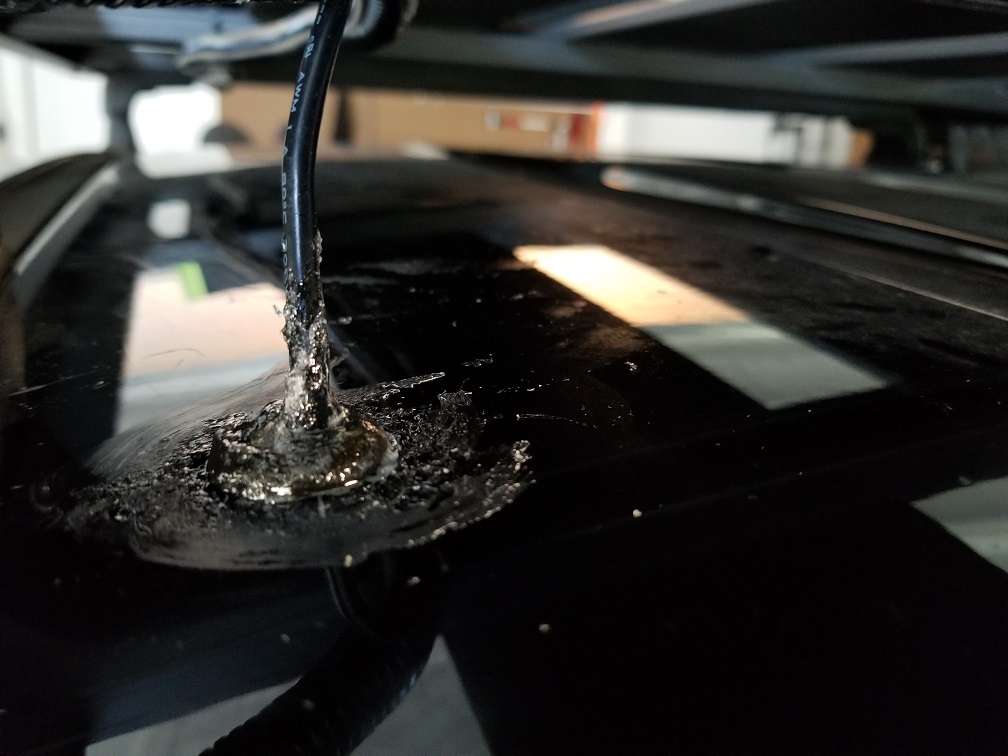 I really enjoyed doing this. For my first time doing a custom, i.e. no instructions provided, I feel like I did a pretty good job. There's a lot that I can improve on though. For example, I'd really like to implement a "quick release" for the rear brackets instead of using bolts to secure it.

P.S. Im building a small timelapse video of this as well. It's just taking a little longer than I'd like.

Until next time, strap in and enjoy the ride.

Mod: Power all the fridges!